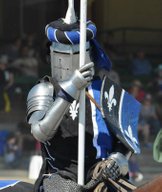 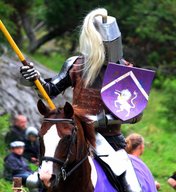 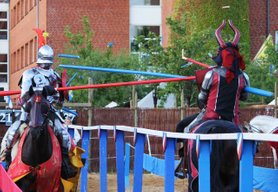 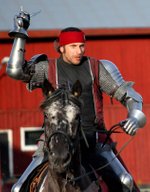 Celeres Nordica are internationally recognized as skilled knights and receives annual invitations to the biggest competitions around the world. We have had knights on the podium in competitions across three continents and among the countries we visited and competed in are Canada, New Zealand, Australia, France, England, Belgium, Poland, Denmark, Norway, Finland and Lithuania.

We have participated in all five European Championships recognized by the IJA and IJL (see information on these organizations below) and won four of them. In the latest unofficial World Cup 2005, which was our first international competition, we finished in 4th place. During the last 10 years, we've had two knights among the highest ranked knights in the world.

The International Jousting Association was formed in England in 1987. Since the mid 90's the organization has grown and spread over the world. The purpose of the IJA is to be an overall organ for jousters all over the world and among other things supply rules and promote jousting as a sport.

The Celeres Nordica is the only Swedish member group of this organisation.

The first tournament arranged by the IJA took place in 1999 with competitors from Australia and New Zealand, and nowadays a couple of tournaments a year are held at various places around the world.

The International Jousting League is an organisation that co-ordinates tournaments as a sport: rules, competition calendar, ranking system etc. Members are spread all over the world but mostly concentrated to Europe. Sweden is also here represented by the Celeres Nordica alone. In 2007 the organization changed its name from Euro Jousting League, due to the fact that its members come from all over the world and not only from Europe anymore.

In 2006 the Celeres Nordica arranged the first EJL affiliated tournament in Sweden. Particpants from all over the world (USA, Norway, Australia, New Zealand, France, Belgium, Germany and Sweden) competed in both skill-at-arms and joust. The Uppsala Tournament was also held in 2007 and 2008.

"Svenska Riddarsällskapens Samarbetsgrupp" is a collective organisation for Swedish groups doing tournament displays. The main task is to organize the work between the groups, above all "Rikstorneringen", the Swedish Championships. The Celeres Nordica has taken part in the championships from the start, and our competitors have reached many good places there.